With respects to Clement Clarke Moore, a Christmas Tale just for you. 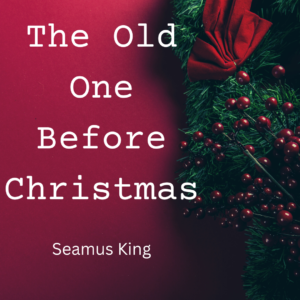 ‘Twas the night before Christmas, when all through the house,
Not a creature was stirring, not even a mouse;
The stockings were hung by the chimney with fear,
In hopes that a savior soon would be here;

The children were nestled all snug in their beds,
While visions of old ones danced in their heads;
And ma with her shotgun, and I with my knife,
Had just settled down for a long winter’s night.

When out on the lawn there arose such a clatter,
I sprang from the bed to see what was the matter.
Away to the window I flew like a flash,
Tore open the shutters and threw up the sash.

The moon on the breast of the new-fallen snow
Gave the lustre of mid-day to objects below,
When, what to my wondering eyes should appear,
But a tentacled mass that was far far too near,

With a hideous burbling that filled night air,
it was coming for everyone, no life would be spared.
Darker than midnight, his shadow did spread,
And in wordless sounds promised we all would be dead.

As dry leaves that fall before the wild hurricane fly,
Crows scattered in murders ere the storm could pass by.
Across our front yard the shadow did grow,
To slay all our hope, right there on the snow.

And then, in a twinkling, I heard a bright cry
I turned toward the yelling, and what did I spy?.
A small band of misfits, all bloodied and torn
Yet through their defiance, my hope was reborn!

They leapt into battle, all heedless of risk,
One slinging some spells, another swinging his fists
A third one leveled his rifle and let off a shot
And suddenly the shadows could somehow be fought. .

It screamed in fell rage, and its tentacled reach
And the sorceress shouted ‘now seal the breach!’
The box stood firm, though soon was enveloped,
While the rifleman chanted a rite they’d developed.

His latin was awful, his pronunciation was trash,
Yet as he droned on the thing started to thrash.
A light opened up, oh so blindingly bright
And the darkness fell toward it, though its pull it did fight.

Then a ringing of laughter pealed loud through the sky,
And Jolly Saint Nicholas flew through the sky;
The old god did tremble at this jolly old sight,
And turned toward the light-gash and flew into flight;

The boxer’s body fell down, stripped down to its bones,
And naught but black ash was left of the yard of my home
Yet I counted my blessings, and turned to my wife,
saying ‘let’s make a cuppa, for they saved our life;

We toasted with bergamot, we ate gingered bread,
And thanked the strangers and santa because we weren’t dead.
But ere long they rose, to stride into night,
and said ‘MERRY CHRISTMAS TO YOU – NOW WE’VE EVIL TO FIGHT!’