A Tale of Fanged Horror 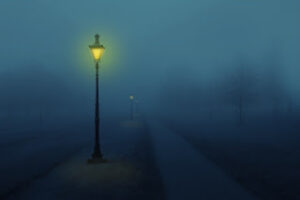 A heavy grey hung over the city. I had no idea where the smog ended and the fog began, just that it was everywhere and clung to everything like a burial shroud. Its omnipresent gloom stifled both sound and light… and something hungry was stalking me in the dark.  The wet, clammy footsteps could be heard clearly, even through the endless mist.

The hairs on the back of my neck rose on end. I turned down a sidestreet, hurrying down a narrow alley to the boulevard on the other side, hoping to shake the thing hunting me. I hoped desperately that it would shy away from the yellow light of the street lamps.

The lamps’ sickly glow barely cut through the endless looming grey, and my hopes fell to dust. My heart pounded in my ears. It was still coming – I could sense it, an oppressive hunger lurking in the fog that had set its attention on me; I knew it the same way a deer knows when a wolf is fast on its heels, or a robin felt the passing of a falcon overhead. I turned and ran, faster and faster, legs churning until they burned and my breath tasted like blood. I stumbled into Monument Square, the small round park only three blocks from the harbor. Long neglected, ringed round by blocks with Greek names carved into them, a nine-foot statue of three women stood alone on a pedestal at the park’s center, the malignant fog shrouding everything but their towering presence. A decades-thick membrane of grime and dirt clung to its stone like a rotted glove, marring any possible gleam of the bronze. I didn’t know who the women were, but they all looked towards the harbor, looks of mingled anticipation and sorrow on their faces.  One sat at the feet of the others, dressed like one of the colonial puritans – another knelt as if in prayer, wearing the humble clothing of an eighteenth century fishwife.  The last one, the most elegant, the most powerful, stood over them both, dressed in the height of victorian fashion, and both her expression and posture spoke of authority and strength

My heart still pounding, I turned to look behind him, narrowing my eyes in an attempt to pierce the obscuring grey veil. I heard nothing, only the distant call of gulls circling the harbor in search of easy food. Nothing came out of the fog, and while the sense of endless, seeking hunger still pressed its cold fingers into the back of my neck, and my mouth still tasted of old pennies, my  heart began to slow, and shallow, gasping breath started to come easier. I took off my hat, ran my fingers through the thick black hair plastered against my head by my terrified sweat, and turned to look at the statue, my eyes raising to gaze at the standing woman. Again, I was struck by how different her expression was from the others; while there was still the apprehension in her bold eyes, from here at her feet she seemed haughty, unforgiving, and utterly cold.

The creature crouching at the statue’s marble base leapt at me, and as its shark-like teeth ripped into my shoulder and it took me down onto the hard cobblestone of the square, I heard a distant chorus of women’s voices rise in haunting song.