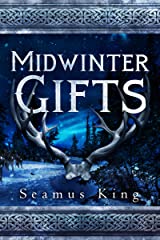 Presented for your pleasure: an excerpt from my first full-length book, Midwinter Gifts.  Meadow Lily and her father are crossing the mountains in the dead of winter, which while beautiful, are full of peril…

(The full book is available in print and ebook here!)

The path still rose steeply, but the stone seemed cut into long, shallow steps, flattened in a path wide enough for three to walk abreast. She swore that they seemed deliberately laid when she caught glimpses of them beneath the snow. No trees lived here except some solitary brightneedles or pines, and precious little foliage of any kind other than the occasional scraggly bush, crawl of aelfivy along the stone walls, and patches of green and violet Dur-moss on the underside of the oddly regular rock outcroppings.

The sun began to sink in the sky, and the day grew colder. The howling wind still ripped through the trees below them and whistled through the jagged crags above. Not much snow stayed up here against the wind, but the small  frozen puddles of runoff needed to be avoided for fear of slipping and tumbling down. A stream of icy water flowed out of a crevice into what looked like a long-cracked stone basin held in the hands of a stone-carved dwarf. Meadow Lily eyed it curiously; she had never seen a stone statue before, and she could still make out detail in the features despite the obvious signs of damage wrought by the long seasons. She wanted to know more about this strange statue in the middle of nowhere, but she did not want to stop to ask. The cold had sunk its icy teeth into her bones, and the wind seemed to bite through all the layers she had on her, and she craved the shelter her father sought.

It was near dark when her father found the spot, a place of wide, bare stone ringed all around by large rocks reaching toward the sky like jutting teeth.

“Another waypoint?” She asked.

“I don’t know,” he said. “I think so. There are many watch places here on the Stone Bridge. The old road crosses here, and the stories go that they would watch for giants and other invaders from this place, protecting the First City.”

Father nodded idly, his eyes scanning over the precipice and across the vast white hills and mountains beneath them. The sun dipped below the rim of the mountains, clouds moved over the stars that should be twinkling into existence, and shadowed dark hid the depths of the gorge below. “Gurrentown is not the first settlement here,” he said. “We don’t know the name of the first city anymore, so we call it just that, because it’s as good a name as any. You can find it if you know the way. The old road runs right to it. It is full of crumbled stone and long-abandoned houses.”

“What happened to it?”

“The Atheledes,” her father replied, looking back at her. “They came, they built Gurrentown, and they laid waste to it.”

“It is their way,” he replied. “They come and they take, leaving none for anyone else. They have taken over most of this side of the continent, with the exception of the Kerwyn Valley.”

He nodded. “There is a power that sleeps in that valley, and the folk there are too wild for any to rule for long. No matter what the Atheledes think, land is not a thing that can be mastered. Mountains cannot be tamed and rivers cannot be bound forever. Your mother’s people know it well.” He glanced at the ring of stones. “We should build the fire high tonight,” he said. “I will need your help. Keep your bow ready.”

He pulled the oilskin off of the cache of firewood and carefully laid his tinder, striking flint to steel with practiced ease and bringing the fire to life. “Keep feeding the fire,” he murmured, tapping the small pile of tinder next to him, and rose. “We can’t afford for it to die.”

She nodded and sat where he had been as he watched him walk over to one of the nearby brightneedles. Her gaze swept back out over the path, hoping they were safe here, but there was a worried pit at the bottom of her stomach that made her feet feel heavy. Her father returned with two long branches that he set by the flames, and then he settled down next to her. She snuggled into his side, and he kept feeding the fire. Soon, its red-orange flames leaped higher, and their warmth ate away some of the worst of the cold from their bones. The wind whistled through the stones, but they kept the worst of it away, sheltering Meadow Lily, her father, and the fire.

Night fell. Gray twilight darkened into blackness with the unbelievable speed only found close to the longest night of the year. The fire, full of flickering life, shed bright light all around them, but both Meadow Lily and her father felt the tension growing taut as a bow string. The stars never appeared through the clouds, and they went through a great deal of wood before they saw the glimmer of moonlight through the thick cloud cover.

Then the howls began. Many howls, hungry howls, echoing across the walls of the mountains.

“How many?” Meadow Lily asked.

“I’m not sure,” her father replied, putting the ends of the long brightneedle branches in the fire. “I’m hoping the fire will keep them back.”

He did not sound certain.

The clouds moved. Both moons hung high and bright in the sky, and Meadow Lily saw the wolves moving between the rocks, their eyes gleaming red and yellow in the firelight.

“I see them,” he said quietly, and he wrapped his hand around one of the branches.

A wolf crouched and leapt, and suddenly her father was on his feet and striking it hard across the muzzle with the flaming end of the branch. It made a noise of pain and surprise and fled. But a second came, and a third. Meadow Lily let an arrow fly. It hit a grey wolf in the side and it yelped as her father struck another one.

More circled the fire, growling, barking. Their pulled-back lips bared slavering, yellow teeth as they slowly tightened the ring around Meadow Lily and her father. Her bow trembled, her father held a burning branch in each hand.

A low growl came from above them. They turned and looked up. One had crawled upon the highest of the stones, great and dark, its fur glistening silver in the moonlight, and Meadow Lily knew it as the wolf from the night before. She tried to fit another arrow to her bowstring, but her hands trembled, and once again its yellow gaze seemed to freeze her blood and slow her movements.

Then she realized its eyes weren’t focused on her – They were locked on her father. It leapt.