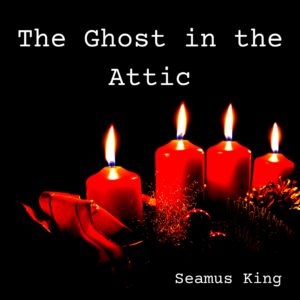 Christmas is a time for ghost stories.  Everyone knows that.  So when Sheila told her best friends, Alice and Jenna, that they thought they should summon a ghost, they thought it would be fun – a laugh.  A hoot.  The three girls gathered together the things they had found in the attic: a tattered, stuffed doll, a chipped mirror, a faded gingham dress.  Relics of a life forgotten. Tools to speak with the dead.

It had all started when the three of them had come upon the secret attic two weeks ago, with its tiny bed that even Jenna could barely fit on, its threadbare circular rug nearly completely eaten away by rats, and its corners so densely cobwebbed the miniscule room seemed filled with fog. “I remember mom telling me about this house,” Sheila had told her two confederates in the hushed whispers of a subject matter expert.  “She said that a girl died here.”

“How?”  Alice, a parson’s daughter, had wondered.

“Well,” Sheila said.  “It depends who you ask.”  She looked around conspiratorially.  “Some say she tripped on the steps and broke her neck.  Some say her momma boarded her up here till she starved to death.  Some even say her daddy killed her.”

The other girls gasped.

“I don’t know,” said Jenna, the youngest by two months.  “My gramma’s lived here since before I was born, and she never said…”

“Grownups never tell us anything interesting,” Sheila had replied.

They had all nodded in agreement because this was so obviously true.

Sheila had been looking for an opportunity like this since she’d found a chest hidden under her older sister Vicki’s bed – it had several old books in it, including one that had bits about ghosts in it and several very informative diagrams. She’s the one that had suggested they get together to do this, to talk to the girl’s ghost and find out what really happened. Alice, the arty one, had drawn the circle with salt liberated from her mother’s pantry, and Jenna had played lookout while they snuck into the attic.

“There,” Alice said, looking up from the circle.  She wasn’t sure how much she believed in ghosts, but she was willing to do what Sheila said. “How’s that?”

“It’s ugly,” Sheila said, her dark ringlets swaying as she shook her head.  “Why can’t you draw a proper circle?”

“This is a proper circle!”  Alice snapped, her dark eyes flashing.

“Guys, keep it down!” Jenna said, waving her arms.  “Gramma’s only just downstairs. You’ll wake her.”

“Your gramma’s snoring so loud I don’t think we could wake her if we shouted,” Sheila said.  “Anyway.  The circle’s ugly, and it’s too big.”

“But aren’t we supposed to be inside of it?”

Sheila glared at Alice.  “Why would we be?”

“Well,” Alice said carefully.  “You called it a circle of protection, right?  So, we need to be in it.”

Alice looked hurt, and after a moment, Sheila relented.  “Fine,” she said.  “Let’s get in the circle, okay?  Fine.”

Alice and Jenny exchanged looks.  They were both uneasy, but Sheila relented so rarely they could hardly ignore it. They all got into the small circle, stepping very carefully so as to not smudge the thin line of salt, and knelt down around the objects.  Sheila carefully set her candle down in the middle, and then the three of them joined hands.

The candle flickered, as if in a breeze.  “What was that?” Jenna squeaked.

“That was nothing,” Sheila said.  “Candles do that.”

“Is it cold here?”  Alice asked, her eyes locked on the candle-flame, twinned and reflected in what remained of the little broken hand-mirror’s pane.  “I don’t remember it being this cold.”

“It’s snowing outside.  Of course it’s cold! Stop whining,” Sheila said, and she began to recite the small chant she’d copied down in spidery, flowing letters.

“Those words sound like nonsense,” Alice said. “I don’t understand.”

“That’s because they’re Latin,” Sheila said.  “Which you would know, if you had listened to me.  Now repeat after me.”

Hesitantly, the other girls echoed what she said.  She read another line, and again they echoed her.  Their voices seemed to dwindle, their words falling dead on the floor stifled by the weight of the room’s stillness. Little bumps raised along their arms under the long sleeves of their dresses and their breath formed little grey-white plumes of moist air.

“Sheila,” Alice whispered,shivering.  “I think you should stop.  I’m scared.”

“Me too,” Jenna said, knuckles whitening as she gripped her friends’ hands.  “Please, stop.  Can we just go downstairs? Gramma baked gingerbread men last night, we can get some from the jar.  You can have mine.”

“Don’t be such a pushover,” Sheila said.  “We only have one line left.”  Without waiting for the others to respond, she launched right into it.

The other two echoed, dutifully, then they waited.  Each second stretched onward like shadows stretching with the sinking sun, stretching into an eternity, endless and interminable, as they three stood in the cold attic, their hearts pounding.

“Nothing’s happening,” Alice said.  “Are you sure you read the right thing?”

“I copied it word for word out of the book.”  Sheila insisted. “I don’t get it. It’s you guys!  You guys must have messed it up, not repeating properly.  You make me so mad!”

She wadded up the piece of paper and threw it to the floor.  It bounced on the threadbare rug to fall against the ancient stuffed rabbit and then rolled to a stop just across the edge of the delicately drawn salt-circle.

The candle went out.